Why do I need CleanOut?

If you’re like most people, you’ve been using email for most of your adult life and although you may have developed a routine for managing it you may feel that your current approach is far from perfect. The avalanche of email is not slowing down and you have to choose between multi-tasking while on calls or working on weekends/nights to keep up, or allowing the number of unread emails to grow into the thousands at which point you may feel overwhelmed by Information Overload.

There’s a lot of focus these days on reducing the number of emails you send/receive with team collaboration tools like Slack and Microsoft Teams (plus other tools you may personally use like Skype, SMS, WhatsApp, WeChat, Facebook Messenger etc.) although a massive number of messages are still sent by email, which just means you have more inboxes to check!

Despite the popularity of these tools they don’t help the individual working alone at 10pm, after a busy day of meetings and calls, who still has eighty unread messages received that day, and hundreds or thousands from weeks gone by, trying to manage them with essentially the same inbox technology as they had thirty years ago.

CleanOut was created for those who can relate to this and are open to the idea of trying something new. Be warned however that the biggest challenge you will face in changing the way you manage email is not the technology but unlearning decades of old habits that are deeply entrenched into your routine. The reward for those who persevere to learn the new way, though, is much more free time, greater responsiveness to the most important people in their lives and a sense of confidence that they are well organized and have things under control.

CleanOut is an app that provides a much faster way of checking your email while helping you organize the messages you want to keep and reminding you to follow up on your action items.

It is worth taking a minute, though, to clarify what CleanOut is not.

CleanOut is NOT a new email client to replace Outlook. CleanOut complements Microsoft Outlook (including Office 365 and Outlook.com) by giving you additional tools for checking your email which is where people spend most of their time. CleanOut is built on the belief that Outlook already has all the features most people need but power users just need additional help when dealing with massive amounts of complex email. If you only have a few new messages, want to send a new email, check your calendar etc. use Outlook as you normally would. But when your Inbox is overflowing get out “the big gun” and use CleanOut!

The core features that allow CleanOut to achieve such a significant improvement in productivity are:

Checking your email in priority order:

For most people their objective when they check their email is to get in and out as quickly as possible while making sure they read (and possibly reply to) the most important messages. Two possible approaches to do this are:

The problem with either approach is that they don’t scale for anyone who receives 100+ emails per day or has multiple Inboxes to manage. That number is even lower if the emails contain complex information (e.g. legal, technical, financial) that require more thought.

In the first approach you run the risk that you will not get to the most important message, before you run out of time, and will have wasted your time on less important subjects.

The second approach, which has been likened to chickens scratching and pecking for grain to eat, is stressful deciding what to look at first, second, third etc. for fear of missing the most important messages.

CleanOut, on the other hand, uses the power of Machine Learning to assign a score to each message, between 1 and 1000, based on its predicted importance to you.

These scores are calculated on the statistical probability of you taking a certain action on a message based on:

In the process, CleanOut looks at combinations of different factors to determine the joint probability of you taking action which often results in scenarios for important messages that you would never have thought of. For example, an email from your CEO sent on Saturday morning is way more important than either a message from the CEO at any other time, or a message from anyone else on a Saturday morning.

The most important aspect is that the Machine Learning algorithm learns what is important to you and the more you use CleanOut the smarter it will get at predicting what is and is not important to you. Therefore, you won’t begin to see the full power of CleanOut until after a few weeks of use.

If you’re not ready to see your emails in priority order yet, there is an option to go through them in date order if you prefer.

Focusing on one email at a time:

Once it has sorted your messages, CleanOut presents them to you one at a time so that you can focus on deciding what to do with that conversation/message. While this approach is new for checking your email, think of it as being like watching the news on TV. They lead with the most important stories and discuss only one story at a time. Even personalized internet news services like Google News or Apple News show the stories that they believe are most relevant at the top, based on which stories you clicked on in the past.

Understanding the context of a message in a conversation:

As mentioned earlier, a unique feature of work email is that there often lots of conversations where many people have already replied to an email and figuring out what is going on, especially when there are multiple threads, can take some time.

To help you quickly get up to speed, CleanOut shows you a concise summary of the Context so you can understand where this message fits into the conversation. This includes a button that lets you see the hierarchy of messages in the conversation and allows you to open any of those messages (and their attachments).

Now that you understand the Context of a conversation/message, the next step is to decide what to do with it. Rather than reinvent the wheel, CleanOut leverages a proven time management approach called the 4 D’s. You can find many books, articles and videos describing the 4 D’s which are Delete, Defer, Delegate and Do It. CleanOut adds three more Actions which are File, Skip Previous and Skip Next.

CleanOut automates the 4 D’s by performing multiple tasks for each Action. For example, after clicking OK on the Delegate action:

CleanOut will send an email to whoever you are delegating it to, move one or more messages to a filing folder, assign it a Category, delete one or more messages from your Inbox and create a Task and/or Calendar Entry to remind you to follow up. Most Outlook users delegating a task would probably not bother to do most of these six possible tasks but with CleanOut they can be done in a single click.

Dealing with entire conversations and not just a single message:

You may have noticed in this section that the words Conversation and Message have been used interchangeably as CleanOut allows you to work with either. Normally when you’re using Outlook you are dealing with one message at a time. CleanOut, however, allows you to Delete or File the entire conversation in a single Action which gives you incredible leverage as you check your email.

For example, assume that you received 100 emails on a certain day and there is an average of five emails per conversation. Assuming you waited until the end of the day to check your email you could process all your new messages in an average of 20 Actions with CleanOut as compared to 100 using regular Outlook, as illustrated below: 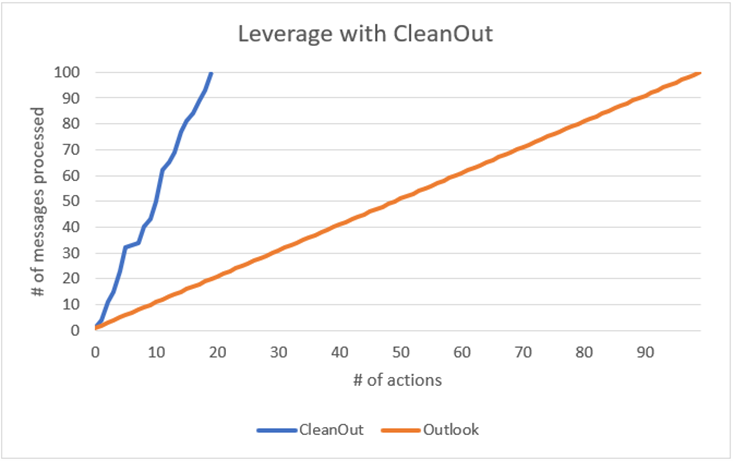 The reality, of course, is that most Outlook users won’t make it through all 100 messages in a single session so the remaining messages will pile up for another day.

As you have no doubt realized by this point, CleanOut is much more than just installing a new app as it also involves learning a new way of checking your email.

It hopefully makes sense that you would not be able to realize such a drastic improvement in your productivity without changing anything. Therefore, part of the challenge is getting used to this new way of checking your email. The great thing is that you can switch back and forth, from your normal Outlook Inbox, to CleanOut at any time allowing you ease your way into it.

It’s hard to believe today that drivers had issues with the automatic car transmission when it was first introduced. They were so used to selecting the gears and deciding when to change that giving it up (the control) was difficult for them. Today we can’t imagine why it was ever a problem as it’s so much easier, allowing you to focus more.

The same will be true with CleanOut and after a while you won’t want to go back to the old way of doing email. Give it a try.

The result will be well worth it!